​Characteristics and development of underground drilling

Underground drilling, the application of surface drilling techniques to drilling operations in tunnels. Its main purposes are: (1) to explore the structure of surrounding rock; (2) reveal the occurrence of the orebody; (3) advanced detection of groundwater and gas hazards in mining tunnels; (4) blind ore body was found; (5) to replace some exploration tunnels or guide the direction of tunnel heading, etc. The following is an introduction to underground drilling。

The development of underground drilling

The drilling pump was formerly called "mud pump". If the whole underground drilling is compared to human life activities, then the drilling pump is like the heart of a human being, which is the source of continuous circulation of drilling fluid from the ground to the bottom of the well, and then back to the ground from the bottom of the underground drilling. Drilling pump is an important part of drilling equipment. In the commonly used positive circulation drilling, it is to send the surface flushing medium - clean water, drilling fluid, or polymer flushing fluid under a certain pressure, through the high-pressure hose, tap, and the center hole of the drill pipe column, straight to the bottom of the drill bit, to cool the bit, remove the rock chips cut down and deliver them to the surface. The commonly used drilling pump is piston or plunger type, which is driven by the powerful engine to rotate the crankshaft of the pump, and the crankshaft then drives the piston or plunger to do reciprocating motion in the pump cylinder through the crosshead. Under the alternating action of the suction and discharge valves, the purpose of pressure and circulation of drilling fluid is realized. During the drilling process, if the drilling pump does not work properly, a downhole drilling accident will occur, just like the human heart stops beating. The classification of drilling pumps can be divided into single-acting drilling pumps and double-acting drilling pumps according to the form of action, and single-cylinder, double-cylinder, three-cylinder, and five-cylinder according to the number of cylinders. 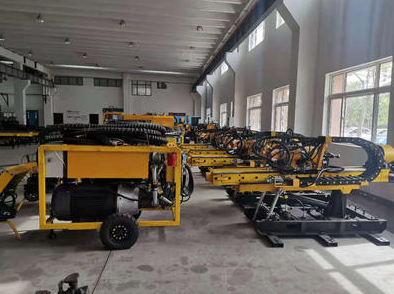 The development of underground drilling

Underground drilling construction is mostly shallow holes within 1000m, deep hole underground drilling has not become the main development demand; Because the construction area is wider and the personnel cost is high, foreign countries pay more attention to the equipment migration and adaptability. From the aspects of comprehensive construction cost control and drilling construction safety guarantee, more attention should be paid to the development of mechanization, program control technology, and safety and reliability in the drilling construction process. Based on the comprehensive economic analysis of underground drilling, combined with the breakthrough of bit metallurgy technology, new achievements of bit performance, such as suitable spectrum, high efficiency, and long life, have been obtained. To better serve geological and mineral exploration, the more accurate and easy-to-use core orientation and coring directional drilling technology has been developed according to the needs of geological research. At the same time, more porous integrated geophysical logging instruments are miniaturized, which provides a sharp tool to further meet the needs of geological exploration.